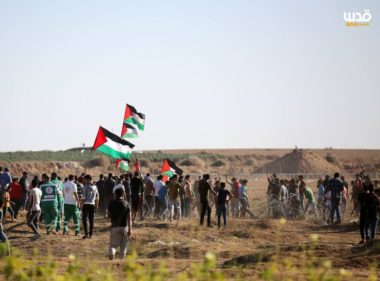 Several Palestinians were injured by live bullets or sustained suffocation from teargas inhalation on Friday, as Israeli forces attacked the Great March of Return protests at Gaza-Israel border, the Health Ministry in Gaza has reported..

The forces fired live bullets and rubber-coated steel rounds at the protesters who gathered at many encampments along the border, in commemoration the 101st anniversary of the Balfour Declaration. Many of the protesters were injured, some seriously.

The Health Ministry said the soldiers shot four Palestinians with live fire near the perimeter fence, east of Gaza city, before they were rushed to a local hospital, and added that many others suffered the effects of teargas inhalation.

Three Palestinians were also shot with live fire east of Khan Younis, in the southern part of the Gaza Strip, and were rushed to Nasser hospital, while many others suffered the effects of teargas inhalation.

The Ministry also said the soldiers shot three Palestinians with live fire, and caused many others to suffer the effects of teargas inhalation, east of Jabalia in northern Gaza. The wounded Palestinians were moved to the Indonesian hospital in nearby Beit Lahia.

Many Palestinians suffered the effects of teargas inhalation, east of the al-Boreij refugee camp, in central Gaza, and east of Rafah, in the southern part of the coastal region.

More than 204 Palestinians have been killed and thousands of others injured, since the outbreak of the Gaza border protests on March 30. The protests call for ending the 12-year-long Israeli blockade of Gaza and for the right of return of the refugees.

Most of the casualties occurred on May 14, when Israeli forces attacked Palestinian protesters marking the 70th anniversary of Israel’s occupation of historical Palestine and the ensuing ethnic cleansing of half a million Palestinian refugees.