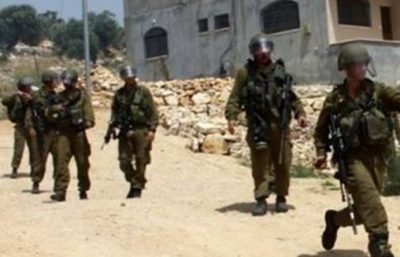 Medical sources have reported that many Palestinians suffered, Friday, the severe effects of teargas inhalation in Hebron city, and Beit Ummar town, in the southern part of the occupied West Bank, after Israeli soldiers invaded them.

The soldiers invaded neighborhoods in the center of Hebron city, and ‘Aseeda area, in Beit Ummar town, north of Hebron, and clashed with local youths who hurled stones on them.

The army fired many rubber-coated steel bullets, gas bombs and concussion grenades, in addition to spraying protesters and homes with waste-water mixed with chemicals.

Similar clashes took place in al-Hawawer area, north of Hebron, while the soldiers surrounded neighborhoods, reportedly after some youngsters hurled stones on a settler’s car, and army jeeps.

On Friday at night, several extremist Israeli colonists attacked Palestinian shop in the al-Ras and Wad al-Hassen areas, close to Keryat Arba illegal colony, in the center of Hebron city.

The assailants threw rocks and trash at the stores, and attempted to attack many Palestinians, while Israeli soldiers stood and watched without intervening.