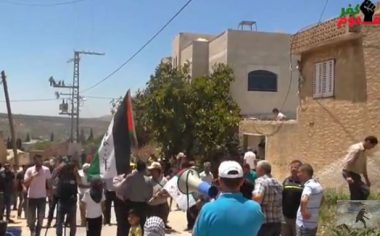 Israeli soldiers invaded, Friday, Kufur Qaddoum town, east of the northern West Bank city of Qalqilia, and used excessive force against the weekly nonviolent protest against the Annexation Wall and colonies, wounding one Palestinian in the arm, and causing dozens to suffer the effects of teargas inhalation.

Morad Eshteiwy, the media coordinator of the Popular Committee against the Annexation Wall and Colonies in Kufur Qaddoum, said the soldiers fired many rubber-coated steel bullets, gas bombs and concussion grenades targeting protesters and homes.

The invasion and attack led to clashes between the soldiers and several youngsters, who hurled stones at the military vehicles.

He added that a young man was shot with a rubber-coated steel bullet in his arm, while dozens of Palestinians received the needed treatment for the effects of teargas inhalation.

The protest also comes in solidarity with the Palestinian detainees who are ongoing with the hunger strike they started on April 17, demanding basic rights guaranteed by International Law and all related agreements.