“SHAMS” Center, in its monthly report, the occupation forces demolish (59) houses and facilities for Palestinian citizens, and notify (54) other facilities during the month of December 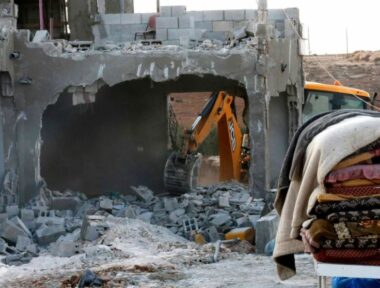 Ramallah: Human Rights and Democracy Media Center “SHAMS” issued its monthly observatory for the month of December 2020 regarding the Israeli demolition, confiscation, eviction and seizure operations against Palestinian establishments, whether religious, tourist, industrial, commercial, educational, official or agricultural, with a focus on residential ones. The observatory came under the title (The Monthly Monitoring Report on Demolitions and Israeli Violations against Palestinian Houses and installations). It is noteworthy that “SHAMS” Center, since the beginning of the year, has been issuing specialized observatories annually, semi-annually, and monthly on this type of violations.

According to the “SHAMS” Center, during the month of December 2020, the Israeli occupation forces targeted (120) facilities owned by Palestinians, whether by demolishing, confiscating, evicting, or distributing notifications with the intention of targeting these facilities in the future.

The most prominent violations centered on demolitions, which affected 59 facilities. (7) of them, their owners were forced to self-demolish them under threat of fines and imprisonment. the Israeli Magistrate’s Court issued a decision to evacuate the houses of the citizens Jawad Abu Nab and Salem Ghaith in Batn al-Hawa neighborhood in Silwan for the benefit of the settlers under the pretext that it has been owned by Jews from Yemen since 1881. The property of Salem Ghaith consists of two floors and 10 people live in it, as for the property of Jawad Abu Nab consists of one apartment, the surroundings of which were previously controlled and part of it was turned into a synagogue.

In terms of notifications, the occupation forces notified (54) facilities for demolition, confiscation, or eviction, most of them are residential, in addition to other commercial and agricultural facilities and animal pens and wells for collecting water.

The second indicator focused on the geographical distribution of violations, monitoring the areas of targeting. This month, the peak of the targeting was in Jerusalem governorate, with (17) facilities that were demolished, followed by Hebron governorate with (15) facilities and then Jericho and Jordan Valley governorate, with (9) facilities that were demolished. In view of the notifications, whether of demolition, confiscation, eviction, or stopping construction work and other violations that prevent Palestinians from realizing their right to build, reconstruct and invest their facilities, the number of notifications reached (54) notifications in different regions this month. The order of the governorates targeted by the notifications was as follows: Hebron (26) establishments, Jenin (18) facilities, and Nablus (5) establishments.

The third indicator focused on the target population since these operations that target Palestinian facilities do not take place in an isolated area from the population. The number of people affected by it during the month of December reached (77) at least, including a large number of children, reaching (27) children, and a number of women, reaching (7) women and they are the groups that suffer most in these cases.

The last indicator reviewed the operations of “self-demolition” and the persistence of oppression by forcing the Palestinians themselves to demolish their installations, foremost of which are their homes under threat of heavy fines. As the number of establishments that the colonial system forced their owners to demolish them this month by the overlap between courts, local authorities, police forces and the occupation army reached (7), most of them in Silwan neighborhood of Jerusalem, distributed among five houses, including a house owned by a woman, in addition to a commercial store and a barrack for raising livestock. In Silwan neighborhood of Jerusalem, the occupation authorities forced the family of Shahira Ghaith, to demolish her house herself, after notifying her earlier, in order to avoid paying heavy fines in case the occupation authorities carried out the demolition, under the pretext of not being licensed, and she has 5 children, 3 girls and two boys, the eldest is 18 years old, and the youngest is 11 years old.

In Jabal Al Mukaber neighborhood in Jerusalem, the occupation authorities forced: Fawaz Abdu, to personally demolish his house, under the pretext of not being licensed. Citizen Mounir Eweissat also demolished his commercial store in Schools Street in Jabal Al Mukaber town, southeast of occupied East Jerusalem, in implementation of the Israeli occupation Municipality’s decision, and its area is about 35 square meters, claiming that it was not licensed.