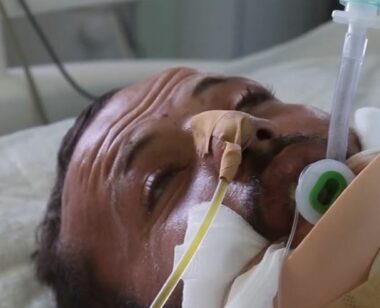 Updated: The doctors at the Intensive Care Unit and Surgery performed surgery to stabilize the condition of the seriously wounded young man, Haroun Abu Aram, 24. However, CT-Scans revealed the Israeli bullet shattered his cervical spine.

The bullet, fired by a soldier from point-blank, shattered C5, C6, and C7 of his spine. He cannot feel or move any of his limbs and is completely paralyzed from the neck down, in addition to being fully dependent on life support.

The patient cannot breathe on his own and is hooked to a respiratory machine, and is receiving IV meds to stabilize his condition.

His father said the army has been trying to force the family to leave their lands and added that the latest attack is a serious escalation to ongoing violations.

“They have been pressuring us to leave our lands; Haroun did nothing wrong; he was in his home when the soldiers came and tried to confiscate the electricity generator, which the family depends on,” the father added, “It is not a separate or a one-time incident; this is an ongoing occupation and escalating violations against innocent civilians.”

The father added that his son, who was recently engaged and was planning to get married within a few days.

It is worth mentioning that the Israeli army demolished his home two months ago, under the pretext of being built without a permit from the “Civil Administration Office,” run by the illegal Israeli military occupation.

Updated From:
Palestinian Young Man Paralyzed after Israeli Forces Shoot Him in the Neck
Jan 2, 2021, at 00:29 – IMEMC News

Israeli forces shot a Palestinian young man in the neck, on Friday, in the village of at-Tiwana, south of Hebron, in the southern occupied West Bank, the Jerusalem Press reported.

The victim, Haroun Rasmi Abu Aram, 24, was shot in the neck with live rounds as he attempted to stop the seizure of his generator by Israeli soldiers.

Witnesses told Palestinian WAFA News Agency that Israeli soldiers fired from point-blank range, striking the young man in the neck. He was then transferred to the Yatta Public Hospital, where his condition was deemed critical.

In a statement, the Palestinian Ministry of Health announced that Abu Aram has suffered complete paralysis of his arms and legs (quadriplegia), as a result of sustaining live rounds to the neck, at close range, which severed his spine.

The Palestinian was arguing with the soldiers who were trying to confiscate his electricity generator, providing him and his family with the needed power to their home.

In related news, Israeli forces suppressed a peaceful demonstration, on Friday, where hundreds of Palestinians assembled, in the central West Bank village of Deir Jarir, northeast of Ramallah. Many others choked on tear-gas fired by the army in an effort to suppress the peaceful gathering, to express their rejection of Israeli settler attempts to build an illegal colonial outpost in the area.