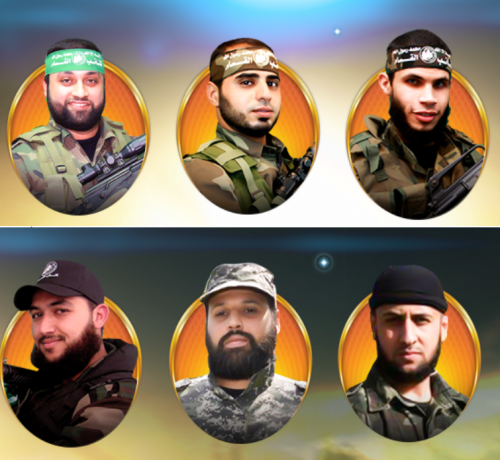 The six men were brought to the al-Aqsa Hospital in Dir al-Balah, where they were pronounced dead.

Three other men were wounded and were brought to the al-Aqsa Hospital.

The six men killed in the explosion were identified as:

The Al-Qassam Brigades, the armed wing of Hamas, issued a preliminary statement saying that the six Palestinians were senior members of the group, and accused Israel of standing behind the explosion.

It added that the six Palestinians “managed to track and uncover one of the largest spy and surveillance systems planted by Israel is the coastal region, and that the located spying device was designed to automatically explode once it is uncovered.

The Brigades described the explosion a “serious, massive crime,” adding that the fighters sacrificed their lives in dismantling and uncovering this surveillance system.

It held Israel directly responsible for the death of its fighters, and added that “payback will be coming, and will be very painful to the enemy, for this crimes and many previous crimes.”

Gaza’s air, sea and borders are all controlled by the Israeli military occupation, which has implemented a deadly siege on the tiny coastal Strip since 2007 – preventing the entry of building materials, medical supplies, food and basic necessities, while preventing the exit of Palestinians from Gaza.

Since March 30th, Palestinian protesters have engaged in weekly demonstrations at the Gaza-Israel border. These demonstrations have been attacked by Israeli sharpshooters stationed at the border, who have killed 45 Palestinians and wounded more than 7,000 – many of whom were wounded with live ammunition fired by Israeli forces at the unarmed demonstrators.