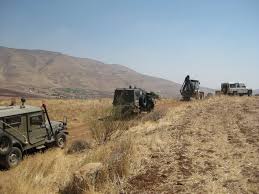 Israeli forces seized, on Wednesday, solar panels belonging to Palestinians in Khirbet al-Hammeh village, in the northern Jordan Valley region of the occupied West Bank, according to a local source.

According to WAFA, Israel claims that the panels, usually donated by the European Union, were installed without permit and, therefore, were taken down.

Palestinian and international organizations say Israel, which has full military control over the Jordan Valley, never gives Palestinians permits to develop their villages, which lack basic humanitarian needs such as electricity and water lines.

In contrast, modern Jewish settlements flourish illegally in the area near the Palestinian village or on their land, and are provided with full infrastructure facilities.

Israel, earlier this week, seized dozens of solar panels donated by Holland for the village of Jibbet al-Dhib, also in the Jordan Valley, provoking furious reaction and protest from the Dutch government.

Before getting the solar panels, Palestinian residents of the Jordan Valley used noisy and expensive diesel-run generators to produce electricity for their communities for a few hours a day.