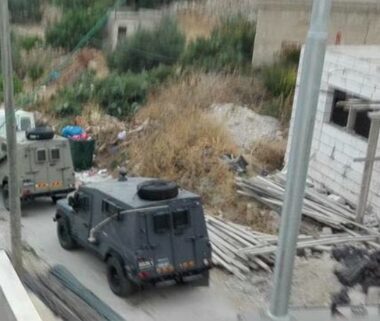 The sources added that many youngsters protested the invasion and hurled stones at the army jeeps before the soldiers fired many gas bombs, concussion grenades, and rubber-coated steel bullets. There have been no reports of injuries.

In Bethlehem, the soldiers invaded Beit Fajjar town, south of the city and broke into a home owned by Ezzat Hasan Deeriyya before confiscating surveillance recordings.

Also, the soldiers abducted two Palestinians from Tulkarem, in the northern part of the occupied West Bank, including one who was taken prisoner near Salfit in the central West Bank.