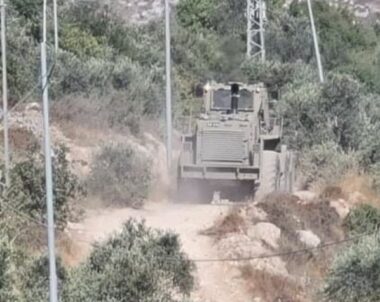 Israeli soldiers invaded, on Monday at dawn, the town of Beita, south of the northern West Bank city of Nablus, and abducted a Palestinian from his home, in addition to installing sand mounds to close various roads.

Many Palestinians protested the invasion, and hurled stones at the army jeeps, while the soldiers fired a few live rounds, in addition to gas bombs and concussion grenades.

The army claimed it closed the roads after Molotov cocktails were hurled at a bus heading to a nearby colony, close to Beita junction, on Sunday at night.