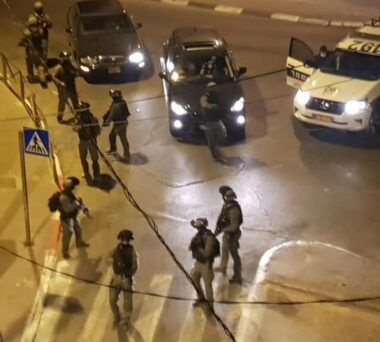 Israeli soldiers abducted, on Monday at dawn, at least thirteen Palestinians from their homes in several parts of the occupied West Bank, in addition to installing many roadblocks.

Update: The soldiers abducted a young man, identified as Hatem Aqel, from his home in the al-Wista neighborhood in Silwan town, in occupied Jerusalem.

The soldiers also stormed the home of Hotheifa Eyad Attoun, in Sur Baher town, southeast of Jerusalem, and ransacked the property before abducting him.

In Bethlehem, south of the occupied capital Jerusalem, the soldiers invaded the al-‘Obeydiyya town, east of the city, searched homes, and abducted Milad Mohammad Hasasna, 25.

The soldiers also abducted a teenage boy, identified as Yousef Saed Hamed, 17, from Silwad town, east of Ramallah, in addition to invading and searching homes in Taybeh nearby village.

In Hebron, in southern West Bank, the soldiers abducted Hafeth Abdul-Hafith Gheith, 52, and Amir Abu Zeina, after invading and searching their homes.

The soldiers invaded and ransacked many homes in Hebron city, and Surif town, northwest of the city, in addition to Bani Neim town, east of the city, and summoned Yousef Ahmad Manasra, Hammad Ali Manasra, Mobarak Oleyyan Ziadat, Issa Jihad Tarayra, Jihad Daoud Tarayra, for interrogation in Etzion military base and security center, north of the city.

The soldiers also installed military roadblocks at the entrances of Sa’ir and Halhoul towns, in addition to the Joret Bahlas area at the northern entrance of Hebron city, before stopping and searching dozens of cars and interrogating dozens of Palestinians while inspecting their ID cards.

During the invasion into Tammoun, the soldiers fired many gas bombs at Palestinian protesters, causing many to suffer the effects of tear gas inhalation.

Furthermore, the soldiers invaded the town of Beita, south of the northern West Bank city of Nablus, and abducted a Palestinian, identified as Mohammad Rashad Hamayel, from his home, in addition to installing sand mounds to close various roads.

In Jenin, in northern West Bank, the soldiers invaded Qabatia and Methaloon town, south of the city, stormed and ransacked homes before abducting three Palestinians.

Media sources said the soldiers abducted Ahmad Bassam Abu ar-Rob, and Amir Abu Hweila, and summoned another Palestinian for interrogation, after breaking into their homes and violently searching them, causing damage, in Qabatian town.

The invasion led to protests, and the soldiers fired a few live rounds, in addition to rubber-coated steel bullets and gas bombs.

In Methaloon town, the soldiers abducted a young man, identified as Ahmad Jamal Nayef, from his home.