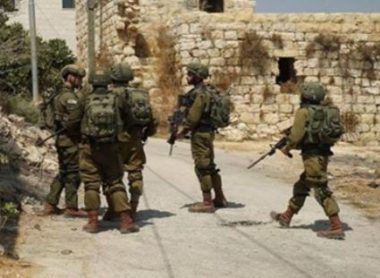 Media sources said the soldiers invaded and violently searched the home of Badran Bader Jaber, 72, causing damage, and abducted him.
They added that the soldiers took the elderly man to a military base in Hebron, before transferring him to Ofer Prison, west of the central West Bank city of Ramallah.

It is worth mentioning that Jaber is a former political prisoner, who was previously imprisoned by Israel for more than 10 years.

In related news, the soldiers were intensively deployed around the Ibrahimi Mosque in Hebron, in addition to several neighborhoods in the city’s center, after they closed the mosque and forced the Palestinians out of it in order to allow groups of illegal colonialist settlers to tour in it.

The soldiers also closed Beit Einoun Junction, at the eastern part of Hebron, and installed a military roadblock at the main road leading to Sa’ir town, northeast of the city, before stopping and searching dozens of cars, and interrogated many Palestinians while inspecting their ID cards.