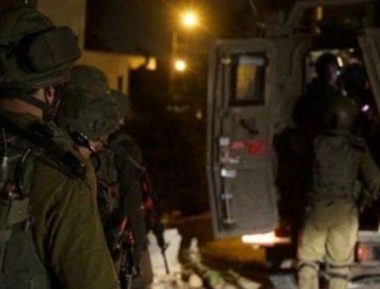 The soldiers also abducted two Palestinians in the Hebron Gate area, in Jerusalem, after they allegedly rammed two settlers with their car.

The soldiers also closed Damascus Gate amidst extensive military deployment around the Al-Aqsa Mosque, in addition to Sultan Suleiman Street, and many neighborhoods in the Old City, and closed Qalandia terminal, north of Jerusalem.

In related news, the soldiers invaded many towns in the southern West Bank governorate of Hebron, searched and ransacked homes, and summoned a former political prisoner identified as Soheib Abdul-Hamid Abu Jarour, for interrogation.

The soldiers also invaded Bani Neim town, east of Hebron, and Beit Awwa town, west of the city, before searching homes, and stole money from the home of a political prisoner, identified as Ashraf Yousef Masalma.

In addition, the soldiers installed many roadblocks around many towns near Hebron, especially Tarqoumia, Ethna and Nouba.

The soldiers also abducted seven Palestinians in the areas the al-Jalazonerefugee camp, and Doura al-Qare’ village, north of the central West Bank city of Ramallah.

Also at dawn, the soldiers invaded Deir Abu Mashal village, northwest of Ramallah, and abducted eleven Palestinians, after storming their homes and ransacking them, in addition to two Palestinians in Jenin refugee camp, in northern West Bank.

In addition, dozens of soldiers invaded the Deheishe refugee camp, south of Bethlehem in the occupied West Bank, shot five Palestinians, including a medic, and abducted three others. The medic, identified as Sajed Abdul-Hakim Mizhir, 18, died from his serious wounds a few hours after he was injured.

It is worth mentioning that the army has abducted overnight at least 30 Palestinians from several parts of the West Bank, including Jerusalem.