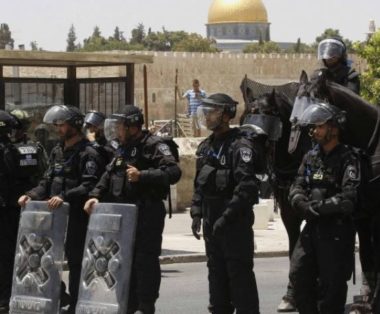 Israeli soldiers abducted and injured , on Friday morning, several young Palestinian men in Qalandia area, north of occupied East Jerusalem, while trying to enter the city for prayers in the Al-Aqsa Mosque, on the third Friday of the holy Muslim month of Ramadan.

Media sources said the Palestinians were trying to enter Jerusalem through gaps in the illegal Annexation Wall, after Israel rejected their permit applications to enter the city to pray.

The army abducted many young men, and took them to their nearby military base, in addition to causing dozens of Palestinians to suffer the effects of teargas inhalation, in addition to cuts and bruises.

They added that the army has deployed dozens of soldiers and military vehicles in large areas near the illegal wall in that area.

It is worth mentioning that Palestinians below the age of 40 are not granted access to occupied Jerusalem for prayers.