At Least Four Palestinians Injured In Tunnel Collapse In Gaza 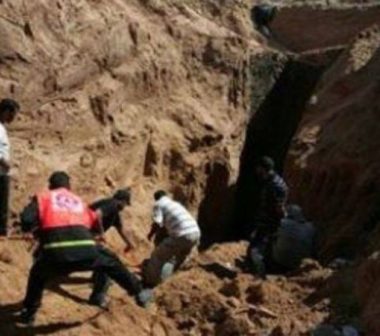 Medical sources said at least four Palestinians were injured, including one who suffered serious wounds, in a tunnel collapse accident, in northern Gaza.

The sources said medics, and rescue volunteers rushed to the collapsed tunnel, in the northern part of the Gaza Strip, and managed to locate the four Palestinians.

The Palestinian Health Ministry in the Gaza Strip has reported that one of the wounded young men suffered a life-threatening injury.

Although some of the tunnels are used by armed resistance factions in Gaza Strip, many tunnels are used for smuggling, among several other materials, food supplies, medicine and fuel into the besieged and impoverished coastal region.

In February of this year, two Palestinians were killed, and nine were injured in a tunnel accident on the border with Egypt, in Rafah, in the southern part of the Gaza Strip.

There have been dozens of casualties, including fatalities in similar incidents, in addition to those who were killed or injured when Israel, and sometimes Egypt, bombarded the tunnels.