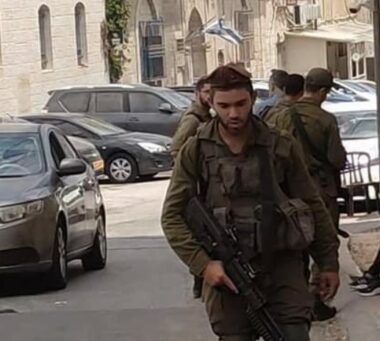 The soldiers also abducted Badea’ Nasser from his home in Beita town, south of Nablus, in the northern part of the West Bank.

In Bethlehem, south of occupied Jerusalem, the soldiers abducted a young man, Hussein Abu Srour, from his home.

In Hebron, in the southern West Bank, the soldiers abducted Jawad Thabet Abu Aisha, 45, from his home, in addition to Mazen Omran Wazwaz and Mahmoud Dweik after stopping him in the as-Saheb junction, south of Hebron.

In related news, illegal Israeli colonizers of the Ramat Yishai outpost attacked many Palestinians in the center of Hebron city for the second day.

The colonizers also cut barb wires around a defunct iron and copper factory that was closed by the army twenty-two years earlier when the army surrounded the area and installed fences and gates that remained in place, forcing the Palestinians to walk and pass through the security gates to reach their homes and lands, or when they leave them.