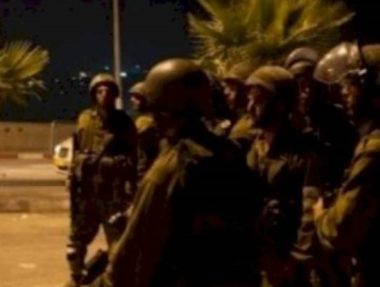 Israeli soldiers abducted, on Wednesday at dawn, seven Palestinians from several parts of the occupied West Bank, after the army invaded and searched many homes, and injured many others, in addition to attacking journalists and confiscating two cars.

In Ramallah governorate, in central West Bank, the soldiers abducted five Palestinians, including a woman who is a former political prisoner.

The Palestinian Prisoners’ Society (PPS) said the soldiers abducted a former political prisoner, identified as Bushra Tawil, in addition to Laith ‘Aassi Tarifi, from their homes from the al-Biereh city.

It added that the soldiers also abducted Ahmad Kayed from Beitin town, Kamel Nakhla from the al-Jalazoun refugee camp, and Ahmad Abdullah as-Saher, from Silwad town.

The soldiers also caused dozens of Palestinians to suffer the effects of teargas inhalation, during protests that erupted after the army invaded Birzeit city and the al-Jalazoun refugee camp, in addition to the neighborhoods of Ein Misbah and Um ash-Sharayet.

Medical sources in Ramallah said the soldiers shot a young man with a rubber-coated steel bullet in his leg, and prevented many journalists from documenting the invasions, before assaulting of them, identified as Mohammad Turkman, Ali Dar Ali and Karim Khamaisa.

Furthermore, the soldiers abducted Mahmoud Bajes Aqel and Nayef Abdullah Shatreet, from their homes in Halhoul town, north of the southern West Bank city of Hebron.

The soldiers also searched and ransacked the homes of Eyad Bajes Aqel in Halhoul town, and Ezzeddin al-Ja’bari, from Hebron city.

In Bethlehem, south of occupied Jerusalem, the soldiers invaded Marah Rabah village, south of the city, and confiscated a car owned by a local resident, in addition to storming and searching homes in ‘Aida refugee camp, north of Bethlehem.

In ‘Azzoun town, east of the northern West Bank city of Qalqilia, the soldiers invaded and searched the home of Ahmad Qassem Sheikh, and confiscated a car, owned by another resident.

Protests also took place in the al-Basateen area in Qalqilia, where some protested hurled Molotov cocktails at the invading army jeeps.

Media sources in Nablus said a protester hurled a Molotov cocktail at an army jeep during the invasion.

In occupied Jerusalem, the soldiers searched homes and abducted a young man, identified as Husam Abu Mayyala, and his father, from their home in Shu’fat refugee camp, north of the city, and fired many gas bombs at protesters.