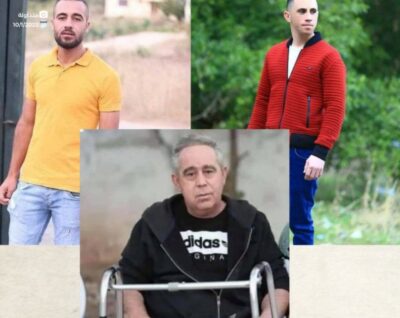 Israeli soldiers abducted, on Thursday at dawn, seven Palestinians, including a father and his son, near the northern West Bank city of Jenin and one north of occupied Jerusalem.

Sammour added that the soldiers abducted a physically challenged father, Abdul-Qader Khozeimiyya, and his son Nabil, in addition to Mo’tasem Kamil, from their homes in the town.

The invasion and abductions led to protests before the soldiers fired live rounds, gas bombs, and rubber-coated steel bullets.

In addition, the soldiers abducted Nizar Abu Shalbak from his home in the Qalandia refugee camp, north of Jerusalem.

The soldiers also abducted Mershed Shawamra and Mansour Shawamra, from the ar-Ram nearby town, northeast of Jenin, and Abdul-Hakim Rabea’ from Beit Anan town, northwest of the occupied city.