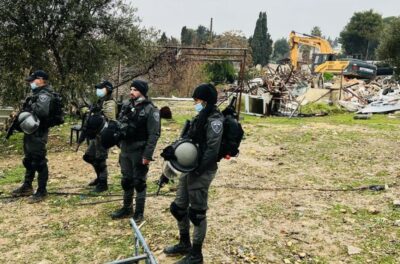 Israeli soldiers abducted, on Wednesday evening, five Palestinians and two solidarity activists, during a peaceful sit-in protest denouncing the demolition of two homes belonging to the Salhiyya family in Sheikh Jarrah, in the occupied capital, Jerusalem, in the West Bank.

Media sources said dozens of Palestinians, accompanied by Israeli and international solidarity activists held a protest in front of the al-Maskobiyya interrogation facility, and in front of the house of the mayor of occupied Jerusalem.

The nonviolent protesters were demanding the release of Salhiyya family members, and many other residents, who were abducted, on Wednesday at dawn, before the soldiers demolished their two homes in Sheikh Jarrah.

They added that the police attacked the nonviolent protesters, before abducting five Palestinians and two solidarity activists.

On Wednesday at dawn, dozens of Israeli soldiers invaded Sheikh Jarrah, and demolished the two homes, in addition to abducting 27 Palestinians, including six members of the Salhiyya family.

Sheikh Jarrah remains the target of dangerously escalating Israeli policies aiming at demolishing homes and removing at least 75 Palestinian families from their homes in the neighbourhood, to replace them with illegal colonialist settlers.