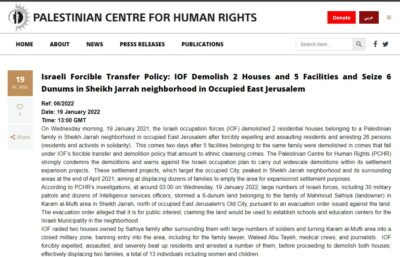 This comes two days after 5 facilities belonging to the same family were demolished in crimes that fall under IOF’s forcible transfer and demolition policy that amount to ethnic cleansing crimes.

The Palestinian Centre for Human Rights (PCHR) strongly condemns the demolitions and warns against the Israeli occupation plan to carry out widescale demolitions within its settlement expansion projects.  These settlement projects, which target the occupied City, peaked in Sheikh Jarrah neighborhood and its surrounding areas at the end of April 2021, aiming at displacing dozens of families to empty the area for expansionist settlement purposes.

According to PCHR’s investigations, at around 03:00 on Wednesday, 19 January 2022, large numbers of Israeli forces, including 30 military patrols and dozens of Intelligence services officers, stormed a 6-dunum land belonging to the family of Mahmoud Salhiya (landowner) in Karam al-Mufti area in Sheikh Jarrah, north of occupied East Jerusalem’s Old City, pursuant to an evacuation order issued against the land.

The evacuation order alleged that it is for public interest, claiming the land would be used to establish schools and education centers for the Israeli Municipality in the neighborhood.

IOF raided two houses owned by Salhiya family after surrounding them with large numbers of soldiers and turning Karam al-Mufti area into a closed military zone, banning entry into the area, including for the family lawyer, Waleed Abu Tayeh, medical crews, and journalists.

IOF forcibly expelled, assaulted, and severely beat up residents and arrested a number of them, before proceeding to demolish both houses; effectively displacing two families, a total of 13 individuals including women and children.

Mahmoud Salhiya’s wife stated that IOF, accompanied with police canines raided the 2 houses at dawn while the families were asleep.  She was with her husband, children, other family members, and Israeli activists when IOF cut the electric supply to both houses and fired sound bombs inside.

She added that IOF forcibly expelled them from the house and physically assaulted all those inside.  They also assaulted women in the other house and beat up her sister-in-law.

She also said that IOF left all the women and children in their sleepwear outside in the dark and cold weather at close to zero Celsius degrees. Neighbors took them in. She pointed out that she does not know what happened to her husband and the activists who were with him, she only saw Israeli soldiers violently assault them.

As a result, Mahmoud Salhiya and a 9-year-old girl were injured during the illegal eviction and demolition operation of the two houses.

Abu Tayeh indicated that all the arrestees were detained at the police station in Bab al-Sahera while the Israeli activists were released, on the condition they never enter the Sheikh Jarrah neighborhood.

IOF summoned military construction vehicles to the area to remove the rubble,  the damaged furniture, and to raze the land. Meanwhile, IOF assaulted press crews and prevented them from approaching the scene or photographing.

Israeli Police claimed in a statement that they assisted the Israeli Municipality in Jerusalem during the eviction of the Salhiya family land and mentioned that the land is confiscated by the municipality to establish educational facilities.

Today’s demolition at the early hours of dawn followed previous Israeli razing and evacuation attempts that started on Monday, as IOF raided and closed the Salhiya land for 10 straight hours, during which Israeli municipal crews destroyed 5 commercial facilities established on the land. At the time, IOF attempted to destroy the 2 houses established on the land in order to evacuate and seize it, allegedly for the sake of public interest.

The demolition came days before the deadline set by the Israeli court for the family to evacuate, i.e. 25 January 2022. As IOF surrounded the land and all structures built on it entirely, Mahmoud Salhiya and members of his family took to the roofs of both houses established on the land to protest, threatening to open gas cylinders and start a fire if municipal construction vehicles were to get closer.

The roof-top sit-in lasted for 10 continuous hours until the Israeli forces retreated, only after razing and destroying several shops and establishments on the Salhiya land on their way out, including a green house, a car repair shop, a car wash, and a barber shop. These enterprises were the main source of livelihood for dozens of Palestinian families.

Dozens of Palestinian families threatened with forcible displacement await the execution or the issuance of evacuation orders by Israeli courts, which lack any of the basic principles of justice. Since 1972, these Jerusalemite families continue on a lengthy, exhausting, and costly battle to challenge the cases filed against them by settlement organizations in Israeli courts, which illegally apply the discriminative Israeli national laws in the occupied territory.

Sheikh Jarrah neighborhood has been at the eye of the storm this past year, particularly in April 2021 when an Israeli court issued an evacuation order against 12 Palestinian families from the neighborhood, amidst escalation by Israeli soldiers demanding the removal of Palestinians.

In response, Palestinian protests peaked in occupied Jerusalem against the Israeli decision, reaching a high last Ramadan. These protests, where dozens of Palestinians sustained injuries, was one of the major causes of the Israeli May 2021 military aggression on the Gaza Strip.

The Palestinian Centre for Human Rights condemns the Israeli demolition and confiscation campaigns and warns against the dangers of the repeated Israeli attempts to force Palestinians away from their lands by destroying their houses and properties or confiscating them. This is a part of the Israeli plan to create unchangeable facts on the group to change the demographics of the occupied city.

PCHR recalls in this instance that Article 49 of the Fourth Geneva Convention of 1949 prohibits the “Individual or mass forcible transfers, as well as deportations of protected persons from occupied territory to the territory of the Occupying Power or to that of any other country, occupied or not,…, regardless of their motive.”

Except, “if the security of the population or imperative military reasons so demand.” Additionally, Article 7.1.d of the Rome Statute of the International Criminal Court stipulates that deportation or forcible transfer of population when committed as part of a widespread or systematic attack directed against any civilian population is a crime against humanity. Also, Articles 6, 7, and 8 of the Rome Statute stipulate that deportation or forcible transfer are war crimes.

PCHR calls upon the international community and United Nations bodies to proactively intervene to end the Israeli crimes against Palestinians and to provide them with the required protection.