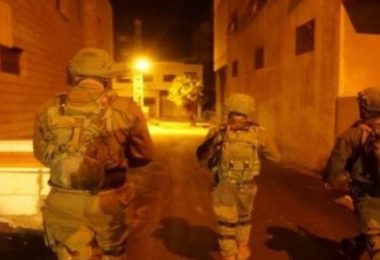 Israeli soldiers abducted, on Monday at dawn, thirteen Palestinians, including two children, from their homes in the West Bank governorates of Hebron, Ramallah, and Tulkarem, the Palestinian Prisoners’ Society (PPS) has reported.

In addition, the soldiers invaded many neighborhoods in Hebron city, and the surrounding towns of Sammoa’, Yatta, Deir Samit, and Sa’ir, in addition to Tarqoumia town, where the soldiers also invaded and violently searched homes, causing serious damage, in addition to confiscating a computer.

The soldiers also installed roadblocks at the main entrances of Sa’ir and Halhoul towns, in addition to Hebron’s northern road, before stopping and searching dozens of cars and interrogated many Palestinians while inspecting their ID cards.