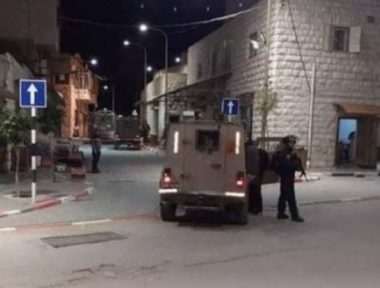 Israeli soldiers shot, late on Sunday at night, a young Palestinian man with a rubber-coated metal bullet, and caused others to suffer the effects of teargas inhalation, in Halhoul town, north of Hebron, in the southern part of the occupied West Bank.

Media sources said several army jeeps accompanied dozens of illegal colonists into the archeological area of the town, after closing it and its surrounding areas.

They added that the invasion led to protests, and that the soldiers fired many rubber-coated steel bullets and gas bombs.

Medical sources said a young man was shot with a rubber-coated steel bullet, before he was rushed to a local clinic, and added that several Palestinians suffered the effects of teargas inhalation.

In related news, dozens of soldiers and colonists invaded the Sammoa’ town, south of Hebron, and headed to an archeological area after the soldiers closed many roads and prevented the Palestinians from crossing.