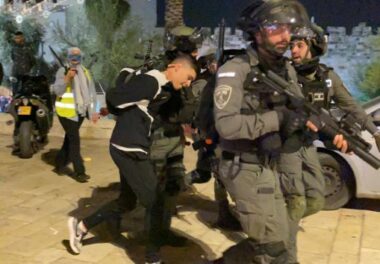 On Thursday evening, Israeli soldiers assaulted many Palestinians and abducted three young men in the Bab al-Amoud area of occupied Jerusalem in the West Bank.

The Wadi Hilweh Information Center In Silwan (Silwanic) said the soldiers assaulted several Palestinians in the area and interrogated many others.

Silwanic added that the soldiers abducted three young men, Othman Jalajel, Rami Fakhouri, and Rashid Resheq, and took them to an interrogation facility.

Dozens of soldiers and police officers were also deployed on all gates leading to the holy site and its courtyards.

The army also invaded the Batn al-Hawa neighborhood in Silwan town, south of the Al-Aqsa Mosque.