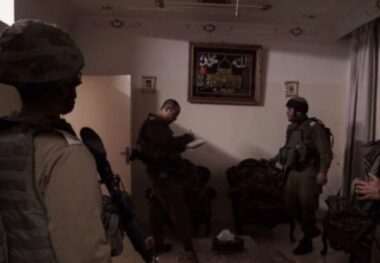 Israeli soldiers abducted, on Thursday at dawn, three Palestinians from Qalqilia, in northern West Bank, and in Hebron, in the southern part.

Another Palestinian, identified as Nizar Abdul-Qader Jabarin, 20, was taken prisoner from his work in occupied Jerusalem. The young man is from Sa’ir town, northeast of Hebron.

Owners of some of the invaded homes have been identified as Habes Khalil Mahareeq and his brother Ziad from Yatta town, Moheeb Abu al-Kabbash, his brother Mojahed, and Jawad Issa Abu Tabeekh, from the as-Sammoa’ town, south of Hebron, in addition to Ibrahim Abdullah Masalma, from Beit Awwa town, west of Hebron.

In related news, the soldiers closed the two main entrances of the al-Mughayyir village, northeast of the central West Bank city of Ramallah, and prevented the Palestinians from entering or leaving it.

The village has been subject to constant invasion and violations, leading to many injures, abductions of locals, and the killing of a child, Ali Ayman Abu Alia, 14, who was shot by an Israeli soldier with a live round in the abdomen, on December 4, 2020.

Also on Thursday at dawn, the soldiers invaded Palestinian communities in Bethlehem and Jenin, in the occupied West Bank, shot a young man and abducted five others.

On Wednesday evening, the soldiers injured many Palestinians in the al-‘Isawiya town, in occupied Jerusalem.