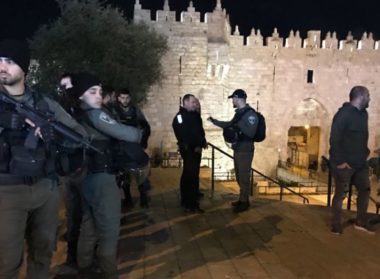 On Tuesday evening, Israeli soldiers abducted three Palestinians in Silwan and near Qalandia Terminal, in occupied Jerusalem, in the West Bank.

Eyewitnesses said the soldiers abducted Nasser Sha’ban from Silwan town, south of the Al-Aqsa Mosque, after stopping him in the Sheikh Jarrah neighborhood in Jerusalem.

In addition, the soldiers abducted a young man, Majd Kabaha, while entering the courtyards of the Al-Aqsa Mosque in Jerusalem and invaded the Batn Al-Hawa neighborhood in Silwan before firing live rounds at protesters.

The soldiers also abducted a young man, who remained unknown at the time of this report, after stopping him at the Qalandia Terminal, north of Jerusalem.

The army fired many live rounds in the air, forcing the Palestinians to leave the terminal after the soldiers closed it.