Soldiers Abduct Two Palestinians, Injure Many, In Jerusalem‚Äôs Al-‚ÄòIsawiya, Abduct Another From Hebron 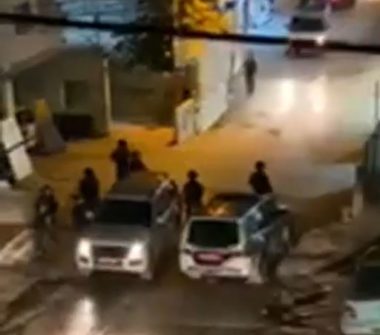 Israeli soldiers invaded, on Friday evening, the al-‚ÄòIsawiya town, in occupied East Jerusalem, abducted two young Palestinian men, and injured several others. The soldiers also abducted one Palestinian from Hebron after summing him for interrogation.

The soldiers also abducted two young men, identified as Ala Esmat Obeid and Mahmoud Sa‚Äôadi Rajabi, and took him to an interrogation facility in occupied Jerusalem.

In related news, the soldiers abducted a young man, identified as Ayyoub Shehada al-Hawamda, from the as-Sammoa‚Äô town, south of the southern West Bank city of Hebron, after summoning him for interrogation in Etzion military base and security center, north of Hebron.

The Palestinian was summoned for interrogation when the soldiers stormed and ransacked his home, on Wednesday.

« Palestinian Dies From Serious Wounds He suffered When The Army Killed Eight Members Of His Family U.S. Congress Members Urge Pompeo to Reverse Decision on Settlements »