Soldiers Assault And Abduct A Palestinian In Jerusalem 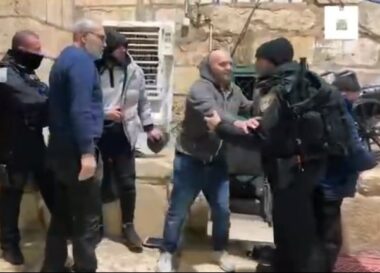 Israeli soldiers assaulted, on Sunday evening, a Palestinian man near Bab Hutta, one of the gates leading to the Al-Aqsa Mosque, in occupied Jerusalem, and abducted him.

A Palestinian who witnessed the assault said that many soldiers assaulted his cousin, Sameh Abul-Karim Shweiki, from the ath-Thoury neighborhood in Jerusalem and abducted him.

He stated that the soldiers then took his cousin to a nearby interrogation facility without justification.

The soldiers also closed the area and imposed severe restrictions on the movement of the Palestinians.

On Sunday at dawn, the soldiers abducted six Palestinians from Bethlehem and Jerusalem in the occupied West Bank, including two teenage boys and siblings.