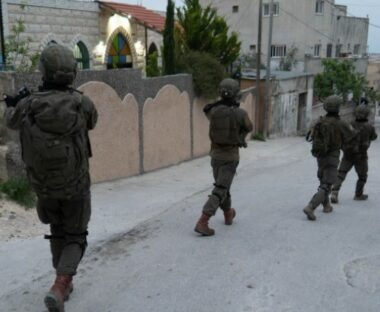 Eyewitnesses said the soldiers installed a roadblock in the Sha’abna neighborhood in Hebron before stopping and searching several Palestinians.

They added that the soldiers assaulted Husam Fawwaz Skafi, 18, and Saddam Ali Ja’bari, 24, before abducting them.

The soldiers also installed several roadblocks on Hebron’s northern entrance and the streets leading to Bani Neim, Sa’ir, and Halhoul towns, stopped and searched dozens of cars, and interrogated many Palestinians while inspecting their ID cards.

Furthermore, the soldiers abducted four Palestinians from their homes in Deir Nitham village, northwest of Ramallah, in the central part of the occupied West Bank.