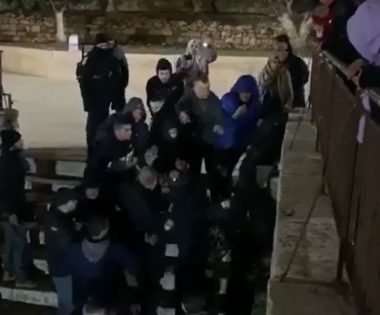 Eyewitnesses said dozens of soldiers, and police officers, invaded the holy site while trying to force the worshipers out, leading to protests.

They added that the soldiers maced many worshipers with pepper-spray, and assaulted others with clubs and batons.

The soldiers also abducted two young men, identified as Mohammad Shawish and Abdulla al-Bizra, before moving them to an interrogation facility.

It is worth mentioning that Bab ar-Rahma Mosque was reopened on February 16th 2019, after dozens of Palestinians protested its closure under Israeli orders for sixteen consecutive years, and managed to reopen it despite continued invasions and attempts to prevent the Muslim worshipers from entering it.

Bab ar-Rahma, as well as the rest of the holy Muslim compound, is subject to constant Israeli violations and invasions.