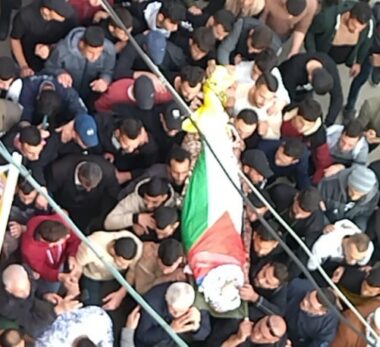 On Wednesday, Israeli soldiers attacked the funeral procession and ceremony of a young man who was killed by the army a day earlier, near Hebron, in the southern part of the occupied West Bank.

Media sources said the funeral was held, on Wednesday afternoon, in the al-‘Arroub refugee camp north of Hebron.

They added that the soldiers fired a barrage of gas bombs, concussion grenades, and gas bombs at the mourners, causing dozens to suffer the effects of tear gas inhalation.

The soldiers also chased several Palestinians and tried to stop the funeral procession and ceremony, but the Palestinians continued despite the escalation.

Hundreds of Palestinians were conducting the funeral procession and ceremony of Ammar Shafiq Abu Afifa, 21, killed by the soldiers, on March 01, 2022, near Beit Fajjar town, south of Bethlehem, in the occupied West Bank.