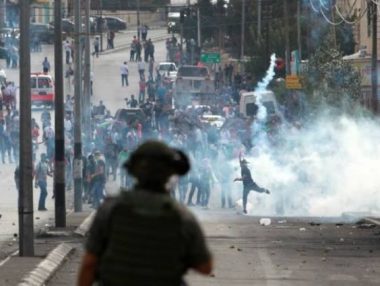 Israeli soldiers attacked, on Tuesday evening, dozens of Palestinians, nonviolently marching in the center of Hebron city, in the southern part of the occupied West Bank, as part of ongoing processions against the Israeli escalation, and the illegal U.S. recognition of occupied Jerusalem as the unified capital of Israel.

The Palestinian marched towards Iben Roshd Junction, heading towards the Shuhada Street, in the center of Hebron city, while carrying Palestinian flags, and signs protesting Donald Trump and his illegal policies, in addition to chanting for the liberation of Palestine, and its occupied capital Jerusalem.

Immediately after the marchers entered the Shuhada Street, near the Container roadblock leading to Tal Romedia Street, the soldiers started firing gas bombs and concussion grenades at them, causing many to suffer the effects of teargas inhalation.

The Secretary of Fateh movement in Hebron, Mohannad al-Ja’bari, said the Israeli escalation and the excessive use of force will not deter the determined Palestinians, who will continue to fight for the liberation of Palestine, and its occupied capital Jerusalem.