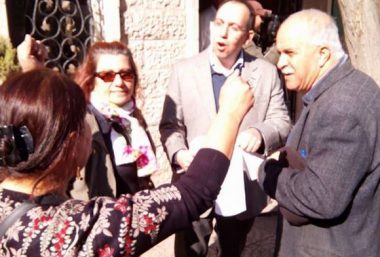 Dozens of Israeli officers, soldiers and security officials, invaded, on Tuesday morning, the ad-Dar Hotel, in Nablus Street, in occupied East Jerusalem, and prevented a forum, titled “Hasn’t the Time Come For the World To Hear the Cry of Jerusalem?” that was to take place in cooperation between the ad-Dar Cultural Institute and Elia Association for Youth Media.

The soldiers and police officers surrounded the hotel, and prevented the Palestinians from entering it, in addition to invading its halls, and confiscating the conference signs.

The soldiers also summoned for interrogation the head of ad-Dar Educational Center, Engineer Samer Sari Nusseibeh, and the head of the Education Department in East Jerusalem, Samir Jibril.

The soldiers also abducted Abdul-Latif Gheith, and Hani al-Isawi, members of the Revolutionary Council of the Palestine Liberation Organization (PLO), in addition to Ahmad Safadi, the head of Elia Association, after they and other participants headed to the “American House” in Nablus Street, to hold their activity there.

Palestinian intellectual, writer and author, journalist Rasim Obeidat, said this activity was meant to express the voice of Jerusalem, of the oppressed Palestinians who live in the occupied city, who also wanted to send a message to the United States and Tel Aviv, rejecting the illegal and immoral American recognition of occupied Jerusalem as the unified capital of Israel.

“The United States has created a new, very dangerous era, where it wants to impose an Israeli-led alleged resolution to the conflict, by burying any chance of peace, and a two-state solution. The U.S recognition, and the stance of Donald Trump, have encouraged Israel and its leaders to issue many more racist laws, aiming at changing the entire demography of occupied Jerusalem, and to isolate the city from its surrounding Palestinian communities,” Rasim said.

“We have witnessed the latest ‘unified Jerusalem law” which was passed in the second and third readings at the Knesset, and now the Israeli legislators are paving the road to the so-called Greater Jerusalem, which will result in massive illegal annexation of Palestinian lands, and aims at removing all Palestinians from the occupied city,” he added, “The American stance is immoral, and illegal under International Law, and all related Security Council Resolutions – it is an outrageous violation targeting the indigenous Palestinians, and their legitimate rights. We also want to send out respect and appreciation to all countries, and nations, that stood against these violations, and voted for Palestine at the General Assembly.”

Many Palestinian institutions in occupied Jerusalem strongly denounced the Israeli attack against this educational event, and considered it part of Israel’s attempts to silence the Palestinians, media freedom, and all events that expose the ongoing and escalating Israeli violations.

They stated that what Israel is doing violates International Law, Security Council Resolution #2222, and all internationally-guaranteed media freedoms.

It is worth mentioning that Israel has been preventing various activities in occupied Jerusalem, including cultural, social, educational and even athletic events, in addition to attacking media outlets and intellectuals, and preventing Palestinains from expressing their opinions, by assaulting their nonviolent educational and cultural events.