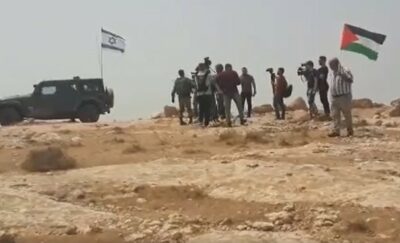 Rateb Jabour, the coordinator of the Popular Committees against the Annexation Wall and Colonies in southern Hebron, said the soldiers attacked the Palestinians and the international peace activists while nonviolently marching on Palestinian lands.

Jabour added that the soldiers detained several Palestinians and international activists, in addition to two journalists, identified as Mashhour al-Wahwah and Sari Jaradat, and a resident, Jamil Salhab.

It is worth mentioning that the soldiers closed all roads leading to the protest area, and declared it a closed zone.

Jabour said the Palestinians held Friday prayers on their lands in Um ash-Shaqhan area in Masafer Yatta where Israeli colonizers from Avigal illegal colony are trying to confiscate to expand their colony in the area between the at-Tiwani village and Shu’ab al-Batem, east of Yatta.

He added that the Palestinians carried Palestinian flags and chanted against the Israeli violations, including the theft of their lands, and affirming their determination to remain steadfast on their lands.

The Palestinians have been holding weekly protests after the illegal Israeli colonizers installed tents and brought a bus on lands owned by Palestinians from the local Jabarin family, and installed an illegal outpost.

Link To Video By WAFA News