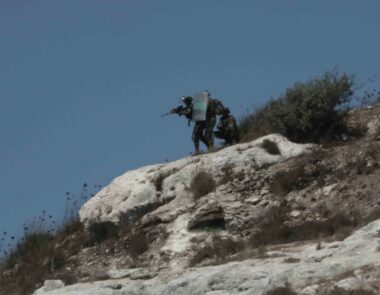 Israeli soldiers attacked, Friday, the weekly procession in Kufur Qaddoum town, east of the northern West Bank city of Qalqilia, and injured at least eight Palestinians, in addition to causing dozens to suffer the effects of tear gas inhalation. The army also caused damage to one ambulance.

The Popular Committee against the Annexation Wall and Colonies in Kufur Qaddoum said the Palestinians marched from the center of the town while chanting against the ongoing Israeli occupation and its escalating violations.

It added that Israeli soldiers invaded the town, and started firing a barrage of rubber-coated steel bullets and sponge-tipped bullets, wounding at least eight Palestinians.

The soldiers also fired gas bombs at random, causing scores of residents, including those in their homes, to suffer the effects of tear gas inhalation.

In addition, the soldiers fired several rubber-coated bullets at a Palestinian ambulance, shattering its read window.

In related news, the soldiers attacked a nonviolent procession held by Palestinians and international peace activists, protesting the escalating Israeli violations in Masafer Yatta, south of Hebron, in the southern part of the occupied West Bank.