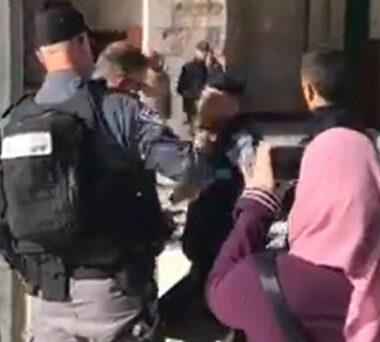 Eyewitnesses said the soldiers stopped the three Palestinians and interrogated them while inspecting their ID cards, before abducting them.

They added that the soldiers took the three young men to the al-Qashla police station, in the Old City.

The army also attacked many Palestinians while trying to prevent them from entering the holy site.

It is worth mentioning that the soldiers also abducted two siblings, from Ya’bad town, southwest of the northern West Bank city of Jenin.

Furthermore, the soldiers attacked the weekly procession in Kufur Qaddoum town, east of the northern West Bank city of Qalqilia, and injured at least eight Palestinians, in addition to causing dozens to suffer the effects of tear gas inhalation. The army also caused damage to one ambulance.

In related news, the soldiers attacked a nonviolent procession held by Palestinians and international peace activists, protesting the escalating Israeli violations in Masafer Yatta, south of Hebron, in the southern part of the occupied West Bank.

On Friday at dawn, the soldiers fired several rounds of live ammunition at a Palestinian car near Bethlehem, south of the occupied Palestinian capital, Jerusalem, in the West Bank, causing it to crash wounding the three young men inside it before abducting them.