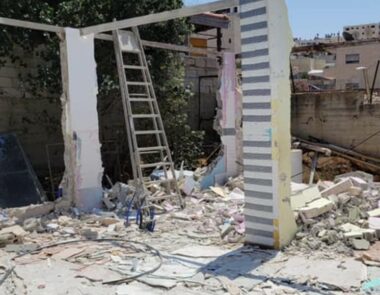 A Palestinian family in the occupied capital, Jerusalem, was forced to demolish its home, Friday, in Silwan town, south of the Al-Aqsa Mosque.

Local sources said that the Sumerian family, from the Wadi Hilweh neighborhood in Silwan, had to demolish its own home to avoid the excessively high fines and fees, especially if the City Council carries the demolition out using its workers and equipment.

They added that the family has been paying fines and fees allegedly for constructing their home without a permit.

They also filed several appeals, in addition to paying the fines, in an attempt to save their home, but received final rulings to demolish it.

On Wednesday, the soldiers demolished an under-construction Palestinian home in Silwan, a home on the al-Walaja village, northwest of Bethlehem, and a car repair facility in addition to the foundation of an under-construction mosque, a well, and a toilet room, in Hebron, in the southern West Bank.