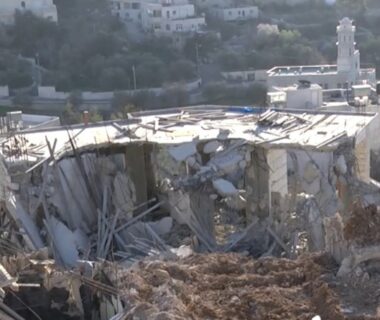 Israeli soldiers demolished, Wednesday a Palestinian home in the al-Walaja village, northwest of Bethlehem, and bulldozed lands In Kisan village, east of the city, south of the occupied Palestinian capital, Jerusalem, in the West Bank.

Khader al-A’raj, the Mayor of al-Walaja, said the soldiers demolished a home owned by Ahmad Nasr Abu at-Teen, allegedly for not being licensed by the so-called “Civil Administration Office” of the Israeli occupation army in the West Bank.

He added that the demolished home is in the Ein Jweiza area which is subject to frequent Israeli violations, including demolition of homes and other property and the bulldozing of Palestinian lands.

Ibrahim Ghazal, the head of Kisan Village Council, said the bulldozing of the lands is part of Israel’s ongoing work to pave roads and install infrastructure for the illegal Ibei HaNahal colony, which was installed on stolen Palestinian lands. The colony is considered part of the Gush Etzion colonialist bloc.

The Palestinians in the area are subject to escalating Israeli violations, including physical assaults, attacks against their livestock, lands, their homes, and other property.

In related news, the soldiers demolished a car repair facility in the al-Harayeq area, at the southern entrance of Hebron city, in the southern part of the occupied West Bank.

In addition, several army jeeps invaded, Tammoun town, southeast of Tubas in northeastern West Bank, before storming a home and violently searching it.

The invasion led to protests before the soldiers fired several rubber-coated steel bullets and gas bombs.