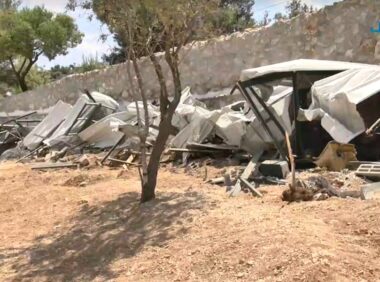 Israeli soldiers demolished, Wednesday, a chicken farm in Ein Jweiza neighborhood, in the al-Walaja village, northwest of Bethlehem, south of occupied Jerusalem in the West Bank.

Khader al-A’raj, the head of al-Walaja Village Council, said the farm is owned by a local man identified as Shadi Mousa Abed Sheikh.

He added that, a week ago, the army issued a demolition order under the pretext of being built without a permit from the Israeli Civil Administration Office, and demolished it today without allowing sufficient time for an appeal.

Al-A’raj stated that the Palestinian had 300 chickens in the demolished farm, and added that most of the chickens died under the rubble as the soldiers did not allow him to take them out of the structure before tearing it down.

It is worth mentioning that al-Walaja has been subject to escalating Israeli violations, including the demolition of many homes and structures.

Al-Walaja, only 5 kilometers west of Bethlehem, has a population of about 2800 Palestinians living in an area of 4.328 Dunams.

The Palestinian Authority has limited control over about 113 Dunams (%2.6) of the village and its lands located in what has been classified under the Oslo Agreement as area B, while Israel controls area C of the village (4.209 Dunams) isolated by the illegal Annexation Wall. Most of the village’s lands are agricultural, open areas and forests.

The village is also surrounded by two illegal Israeli colonies, built on Palestinian lands; Gilo in the eastern area and Har Gilo in the southern area.

Under the Oslo agreement, Area C (%60) of the occupied West Bank Under was supposed to temporarily remain under full Israeli control, security, and civil control.

Area C is currently home to just six percent of West Bank Palestinians, which translates into about 300,000 Palestinians and more than 340,000 Israeli settlers. Over 20,000 of the Palestinians living in Area C are Bedouin and herding communities who live predominantly in tents, sheet-metal shacks, and caves.

Israeli authorities have obstructed Palestinian development of Area C and in much of the rest of the West Bank through military orders. These orders bar Palestinians from registering land, thwart them from building, and forbid local and district planning committees. As a result, Palestinians are excluded from participating in the processes that steer spatial development, while Israel confiscates land for purported public services such as roads built for Jewish Israeli use.

Living under the illegal Israeli occupation, the Palestinians are supposed to be a “protected population” under International Humanitarian law, which also means that Israel, as the occupying power, is prohibited from making permanent changes, and is required to protect the status quo.

However, Israel keeps building and expanding its illegal colonies on stolen Palestinian lands, turning them into anything but temporary.

Read more in this report by the Palestinian Policy Network (al-Shabaka): Israel’s Stranglehold on Area C: Development as Resistance