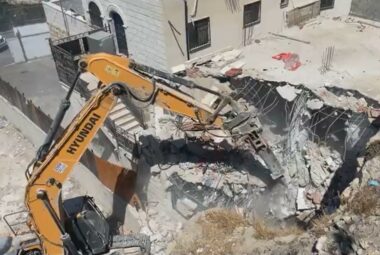 They added that the soldiers demolished a 90 square meter under-construction home, owned by Palestinians from the local Zaghal family.

The family was still constructing the home, and finished its walls, but was preparing for installing the roof.

The Israeli army claimed the home was built without a permit from the City Council in occupied Jerusalem.

In related news, the soldiers demolished a car repair facility in Hebron, in the southern part of the West Bank.

The soldiers also demolished a Palestinian home in the al-Walaja village, northwest of Bethlehem, and bulldozed lands In Kisan village, east of the city, south of Jerusalem.