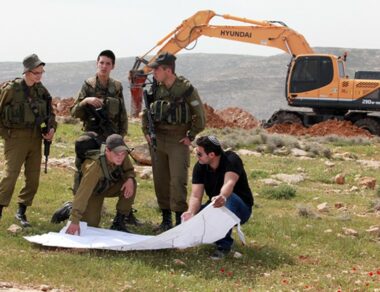 He added that the ten Dunams were planted with 400 grapevines and summer plants, in addition to olive trees that were planted approximately five years ago, and evergreens nearly two years ago.

The lands also had retaining walls and barbed wires, and are owned by a local farmer, identified as Salem Thiab Rajabi.

The army claimed that lands, while privately owned by the Palestinians, are in Area C of the occupied West Bank, under full Israeli control.

In addition, the soldiers demolished an under-construction home in Silwan town, in the occupied Palestinian capital, Jerusalem, in the West Bank.

In related news, the soldiers demolished a car repair facility in Hebron, in the southern part of the West Bank.

The soldiers also demolished a home in the al-Walaja village, northwest of Bethlehem, and bulldozed lands In Kisan village, east of the city, south of Jerusalem.