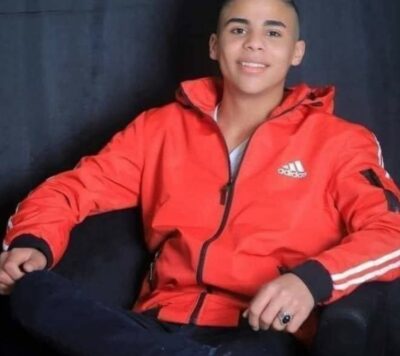 Israeli soldiers killed, on Tuesday at dawn, a Palestinian child in Balata refugee camp, east of the northern West Bank city of Nablus.

Ahmad Jibril, the head of the Nablus office of the Palestinian Red Crescent Society (PRCS), said the child has been identified as Emad Hashash, 15.

He added that the slain child was shot with a live Israeli army round in the head and was pronounced dead after he was transferred to Rafidia hospital in Nablus.

His uncle said Emad went on the rooftop of his home to watch the unfolding events when many army vehicles invaded the refugee camp before a soldier shot him in the head.

Talking to the Palestinian News & Info Agency (WAFA, Emad’s brother, Mohammad, said that he and his brother went on the rooftop to take videos and pictures of the Israeli vehicles while withdrawing from the refugee camp before a soldier fired live rounds at them. He added that the bullet penetrated his brother’s face through his nose and exited from the back of his skull.

He also said that the soldiers hurled a gas grenade at the main door of their home, and obstructed the ambulance while rushing to reach him.

“It took about 40 minutes from the moment he was shot until the medics were able to transfer him to the hospital,” Mohammad stated, “During this time, we were unable to leave out home to seek help for more than 15 minutes.”

The child was killed after several Israeli army vehicles invaded the refugee camp, and fired live rounds, rubber-coated steel bullets, and gas bombs at Palestinians who protested the incursion, and surrounding homes.

The Israeli army claimed that the child was killed during an exchange of fire with Israeli soldiers who invaded the refugee camp to “arrest a wanted Palestinian,” and added that the soldiers shot him when they reportedly “saw him on a roof of a building about to throw a rock at the soldiers.”

Eyewitnesses said the child was killed at dawn and added that the exchange of fire took place between Palestinian resistance fighters and Israeli soldiers shortly after midnight.

The soldiers also invaded and ransacked many homes in the refugee camp, before abducting a young man, identified as Sa’ad al-Ka’bi.