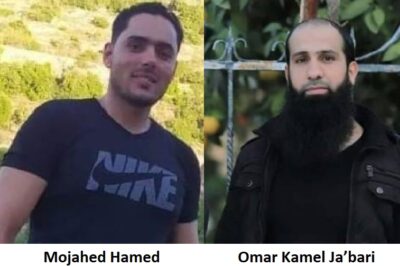 The Palestinian Prisoners’ Society (PPS) has reported that two Palestinian political prisoners, held by Israel under the arbitrary Administrative Detention orders, without charges or trial, have suspended the hunger strike after reaching an agreement ending these continuously renewed orders.

The PPS stated that detainee Omar Kamel Ja’bari, imprisoned by Israeli under the arbitrary Administrative Detention orders, has suspended the hunger strike after reaching an agreement.

The PPS said the detainee, Omar Kamel Ja’bari, went on a hunger strike for seven days, protesting being held without charges or trial.

It added that Ja’bari, from the al-Yamoun town, west of the northern West Bank city of Jenin, managed to obtain an agreement setting a timeframe for the Administrative detention orders, instead of their continued renewal.

It is worth mentioning that Ja’bari was abducted by Israeli soldiers in January 2021, and consecutive four-month Administrative Detention orders without charges or trial. He is currently held at the Ofer Israeli prison.

The PPS also stated that detainee Mojahed Hamed, from Silwad town, northeast of Ramallah in central West Bank, has also suspended the hunger strike which lasted for 42 days, after reaching an agreement for his release in January of 2022.

Hamed was subjected to repeated violations by the soldiers, including being frequently transferred to various prisons and detention camps, in an attempt to force him to end his strike without an agreement for his release.

The PPS said that Hamed, who was abducted by the soldiers on September 22nd, 2020, and was slapped with two consecutive six-month Administrative Detention orders.

Hamed is also a former political prisoner who spent nine years in Israeli prisons and was abducted again only 15 months after his release.

It is worth mentioning that seven detainees are still ongoing with the hunger strike protesting their continued Administrative Detention.