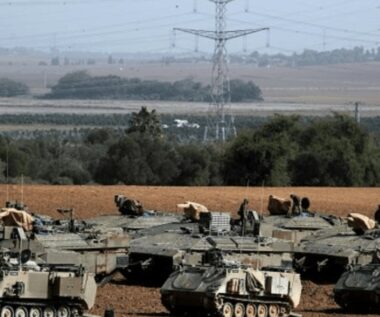 The Israeli army has decided, Tuesday, to increase the deployment of its forces along the perimeter fence, across the eastern parts of the besieged Gaza Strip, in what is called “an effort to stop the Palestinian protests.”

The army stated that after the “recent escalation”, the army has decided to boost its deployment by adding more brigades across the fence.

The military spokesperson of the Israeli occupation army also stated that Israel will “act firmly” against the protests in the coming days.

He added that several plans have been approved after Palestinian factions called for further protests, due to the escalating Israeli violations against the Gaza Strip, and Jerusalem, including the Al-Aqsa Mosque.

On Saturday, an Israeli soldier was seriously injured when he was shot by a Palestinian protester through a hole in the security wall where protesters were gathered, while the Israeli army shot 41 unarmed Palestinians, many of whom with live ammunition, including a 13-year old boy who remains in critical condition after being shot in the head.

Earlier Tuesday, the soldiers abducted a Palestinian merchant at the Beit Hanoun (Erez) border terminal, in the northern part of the Gaza Strip.

On Monday at night, the Israeli soldiers fired many missiles into several areas in the besieged Gaza strip, causing serious damage.

In te occupied West Bank, the soldiers killed, on Tuesday at dawn, a Palestinian child, identified as Emad Hashash, 15, in Balata refugee camp, east of the northern West Bank city of Nablus.

The soldiers also abducted, on Tuesday at dawn, fourteen Palestinians, including siblings, in several parts of the occupied West Bank.