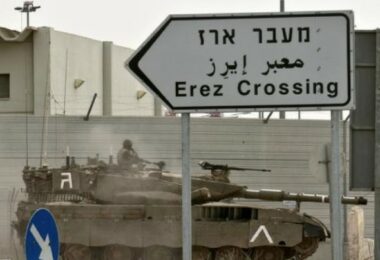 Israeli soldiers abducted, Tuesday, a Palestinian merchant at the Beit Hanoun (Erez) border terminal, in the northern part of the besieged Gaza Strip.

Media sources said the soldiers abducted a merchant, identified as Amjad Ahmad Dardouna, 42, from Jabalia refugee camp, in the northern part of the Gaza Strip.

They added that the soldiers stopped the man at the Erez terminal while he was leaving Gaza, and abducted him before moving him to an unknown destination.

It is worth mentioning that the soldiers frequently abduct merchants, and even patients, at the terminal, despite being granted permits to cross.

In the West Banik, the soldiers abducted, on Tuesday at dawn, fourteen Palestinians, including siblings.