Palestinian Dies From Serious Wounds He Suffered In Gaza 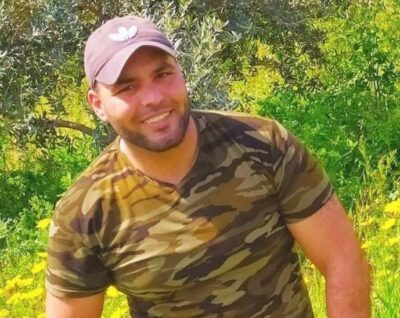 Medical sources at the Shifa Medical Center, west of Gaza city, has reported on Wednesday morning, that a young Palestinian man died from serious wounds he suffered, on Saturday, August 21st, 2021, after Israeli soldiers shot him with live fire.

The sources stated that last Saturday evening, the soldiers shot and seriously injured Osama Khaled D’eij, 32, during protests that took place near the perimeter fence, east of Gaza city.

The Palestinian was rushed to the Shifa Medical Center before he was immediately admitted to surgery but remained in a critical condition at the Urgent Care Unit until he succumbed to his wounds.

Osama, from Jabalia refugee camp, in the northern part of the Gaza Strip, was shot with expanding bullets.

His family said that he got married only a month before he was shot and subsequently died from his serious wounds.

On the same day, the soldiers shot and injured 41 Palestinians, including several children, during protests on Palestinian land near the fence, commemorating the 52nd anniversary of the burning of the Al-Aqsa Mosque, in occupied Jerusalem.

The holy site was burnt, on August 23rd, 1969, by Denis Michael Rohan, a fanatic Australian citizen.

Israel arrested Rohan, before alleging that he was “insane”, and hospitalized him in a mental institution, and on May 14th, 1974, he was released and deported on what Israel called “humanitarian grounds, further psychiatric treatment near his family”.