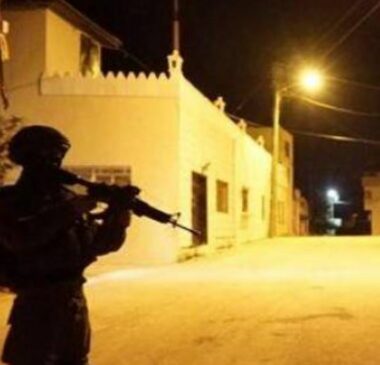 Palestinians protesting the construction of illegal Israeli colonies on their land in the village of Ya’bad, southwest of Jenin, were attacked by Israeli soldiers Friday evening with tear gas canisters fired directly at protesters, and other so-called ‘less-lethal munitions’.

A number of local residents suffered from tear gas inhalation, and were treated on-site.

According to local sources, Israeli troops invaded the Abu Shamla neighborhood, where they were met by youth who threw stones at the invading soldiers, and shouted at them to leave.

The gas fired by the army entered into homes where families were sleeping, and caused many local residents to have to evacuate their homes or suffer from suffocation.

The Israeli military intensified their presence in Ya’bad, Kefirt and Arraba villages Friday night, setting up ‘flying’ checkpoints and blocking traffic for hours. Every Palestinian had to have their identity cards checked at the newly-erected military roadblocks.