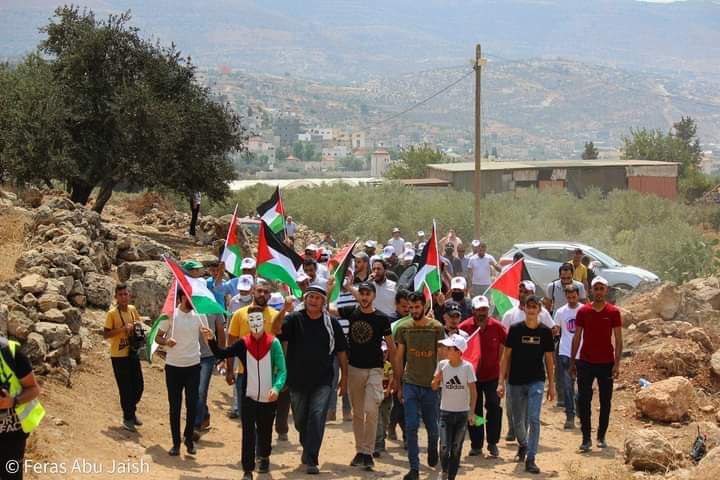 Update from “Palestinian Protests in Beita Attacked by Israeli Troops”

In Beita, the Palestinian Red Crescent Society confirmed that 94 Palestinians; 17 shot with rubber-coated steel bullets, three of them hospitalized, 25 suffered burns due to gas bombs and concussion grenades, and 52 suffered effects of tear gas inhalation.

Among the wounded are three medics; one was injured by glass fragments when the soldiers opened fire at an ambulance, and two medics shot with rubber-coated steel bullets while helping wounded Palestinians.

Palestinians from all political parties came together Friday in the town of Beita to oppose the Israeli colony that was recently established on stolen village land. Israeli troops attacked the protesters with so-called ‘less lethal’ munitions.

The attack by Israeli forces came a day after Israeli troops demolished several roads to prevent the Palestinian protesters from reaching the Jabal Sbaih mountain, where Palestinians have gathered in protest on a near-daily basis to confront and challenge the illegal theft of their land by Israeli colonizers in May.

The Israeli occupation forces destroyed a number of roads to prevent the residents of Beita from reaching Jabal Sbaih mountain. pic.twitter.com/kHSzc2AqP3

On Wednesday, troops also invaded the village of Beita, firing teargas into the streets:

A report this week by Agence France Presse told how, over the past four months, Palestinians from Beita have come together across party lines and using unique non-violent techniques, to challenge the illegal Israeli seizure of their land.

According to that report, “Using laser pointers and noisy horns to torment Jewish settlers across the valley, Palestinians in Beita have set themselves apart from others demonstrating against Israeli presence in the West Bank. But beyond attention-grabbing tactics, protesters in the Palestinian town near Nablus insist their weeks-long campaign against the wildcat settlement of Eviatar is distinct for another reason.

“They describe it as a grassroots movement, not inspired or directed by Fatah secularists who control the Palestinian Authority in the West Bank, or their rivals from the Islamist Hamas that runs the Gaza Strip.
‘Here there is only one flag: That of Palestine. There are no factions’, Said Hamayel told AFP.

“‘We are doing from below what Palestinian leaders cannot do from above,’ argued Hamayel, who said his 15-year-old son Mohammed was killed by Israeli army gunfire in a mid-June riot.”

“The Beita protest[s] broke out in May as a group of hard-line settlers erected a Jewish community on a nearby hilltop. All settlements are considered illegal under international law, but Israel has granted authorization to such communities across the West Bank, a territory it has captured from Jordan during the 1967 Six-Day War.

“But Eviatar was built without Israeli approval and the government struck a deal with settlers for their evacuation on July 2, while it studied the land to evaluate the prospect of eventual authorization.”

In addition to firing tear gas on Friday, and destroying roads on Thursday, Israeli forces in recent weeks have violently assaulted the thousands of Palestinians that have joined in the protests in Beita.

On Friday, July 31st, Israeli soldiers wounded 435 Palestinians during protests against the illegal colonialist activities in three areas in Beita town, near the northern West Bank city of Nablus.