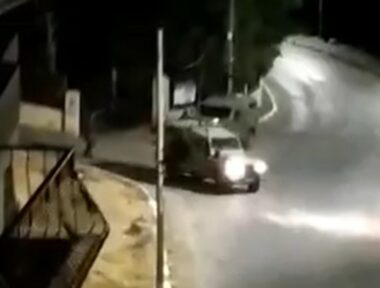 Israeli soldiers fired, on Friday at dawn, several rounds of live ammunition at a Palestinian car near Bethlehem, south of the occupied Palestinian capital, Jerusalem, in the West Bank, causing it to crash wounding the three young men inside it before abducting them.

They added that a Palestinian ambulance rushed to the scene, but the soldiers refused to allow the medics to reach the wounded to provide them with the needed medical treatment.

In related news, the soldiers invaded the al-Khader town, south of Bethlehem city, before invading the family home of a former political prisoner, a teenager who was previously shot and injured by the army, identified as Khaled Mohammad Ghneim, 17.

It is worth mentioning that Khaled was released, Thursday, after being imprisoned by Israel for six months.

During the invasion, the soldiers confiscated Palestinian flags on the rooftop of Ghneim’s home.