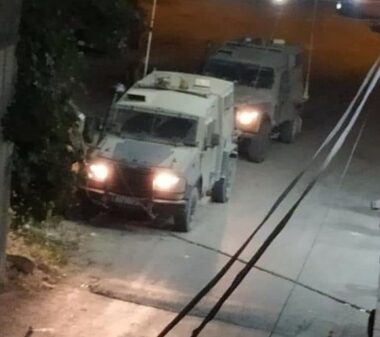 Several Israeli army jeeps invaded, on Thursday evening, the town of Ya’bad, southwest of the northern West Bank city of Jenin, before invading and ransacking homes and stores, and confiscated surveillance recordings.

Local sources said the invasion was carried out by many armored army jeeps that stormed the town from several directions.

They added that the soldiers stormed and ransacked many stores and homes, and confiscated surveillance recordings, in addition to interrogating several Palestinians while inspecting their ID cards.

On Friday at dawn, the soldiers fired several rounds of live ammunition at a Palestinian car near Bethlehem, south of the occupied Palestinian capital, Jerusalem, in the West Bank, causing it to crash wounding the three young men inside it before abducting them.