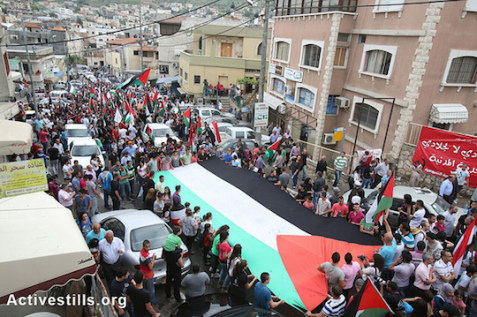 Dozens of Palestinian youth were injured Monday evening, in clashes with Israeli soldiers who tried to forestall a march in solidarity with hunger striker detainee Bilal Kayed, in Abu Dis town, to the east of Jerusalem.

Eyewitness reported, according to Al Ray Palestinian Media Agency, that the clashes erupted during a solidarity march for detainee Bilal Kayed who has been on hunger strike for 41 days, in protest of his administrative detention — an archaic procedure dating back to the days of British Mandate Palestine, in which a “suspect” is detained without charge or trial, for renewable periods of 6 months.

The witness said that the march was launched from Abu Dis club, and, when it reached Al-Jabal crossroad, Issraeli soldiers began firing tear gas and rubber bullets towards the march, trying to forestall it.

Palestinian youth reacted by throwing stones towards the Israeli soldiers, with clashes reportedly lasting for hours.