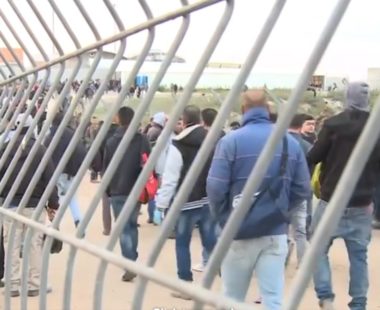 On Sunday, Israeli soldiers attacked many Palestinian workers near the illegal Annexation Wall in several areas near Aneen, Rommana, al-Arqa, and Zabbouba, west of the northern West Bank city of Jenin.

The workers were trying to cross the gates of the Annexation Wall on their way to their work in Jerusalem and several areas across the Green Line.

The soldiers chased many workers and fired rubber-coated steel bullets and gas bombs to force them to leave, although they have work and entry permits.

It is worth mentioning that many workers also try to find alternate ways to cross to avoid the overcrowded military roadblocks and the gates of the illegal Wall and are constantly attacked by the soldiers, causing dozens of injuries.

In related news, the soldiers injured dozens of Palestinians during protests near the al-Jalama military roadblock northeast of Jenin.